The New London Police Union is set for a formal hearing on Wednesday February 10 before the State Board of Mediation and Arbitration (SBMA) charging the City with two Municipal Prohibited Practice complaints for repudiation of their labor contract and bad faith bargaining. SBMA is a government-appointed board within the state Department of Labor responsible for labor disputes. Repudiation of a contract occurs where one party is unwilling to perform their obligations under a contract.
Bad Faith is intentional dishonest act(s) by misleading another, entering into an agreement without the intention or means to fulfill it, or violating basic standards of honesty in dealing with others.

In this instance a police captain vacancy occurred in January 2020 and remains unfilled to this date. The police labor contract specifically states clearly and unequivocally “there shall be three police captains”.

During that time the Union and City were also attempting to negotiate terms on impact bargaining for agency re-organization with the Union to concede elimination of a captain position and the City to add a lieutenant to streamline division responsibilities and ensure more lower-level supervision of personnel.
Talks collapsed when the Union discovered the City intentionally misled the Union with one of the negotiated terms of the agreement claiming they had extended certified promotional lists, which they have the right to do, when in fact the City never extended the lists or even requested the Personnel Board consider such a request as required under personnel rules.

This is very concerning to the members and myself going forward said Staff Representative, John Miller of AFSCME Council 4. “How can we trust the City in the future, when they completely misled us during these discussions” he added.
The Union had met with the City numerous times to settle the issues but continues to ignore contract language resulting in the charges being filed.
During a prior informal SBMA hearing Chief Administrative Officer Steve Fields admitted they “screwed up” requesting additional times from the hearing officer to sit down with the union insisting they had the desire and ability to settle the case and would do so within the next 6 weeks if an extension was granted.

City Hall officials formally met only once with the Union rejecting a Union offer to settle with no counter offer. Subsequently multiple additional Union offers were provided which were also ignored by the City. However, once the City learned of possible media involvement they made a last- minute counter offers the Union late Friday afternoon the Union deemed unacceptable. SBMA was notified of the labor charges against the City resulting in the upcoming hearing set for next Thursday. 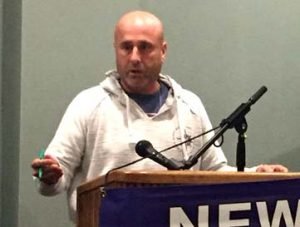 “The actions by the police chief and Steve Fields have been a slap in the face to the membership” said union president Todd Lynch. “Even more troubling is the mayor who is also a labor attorney representing fire unions and prides himself on being fair with unions has done nothing to resolve this issue. This is the same mayor who has remained silent when it comes to supporting my membership from constant attacks to defund our budget and remove the 80 man ordinance. I remind you this is the same ordinance that then Councilor and mayoral candidate Passero authored and utilized to win the mayoral election. We believe the facts of the case speak loud and clear and look forward to a fair hearing for favorable resolution by the SBMA panel” added Lynch.
The police union represents 68 members from patrol officer to the rank of captain.